Card games have grown incredibly popular on mobile devices as one of the genres that work really well with the limited control options of the touch screen. They don’t require a lot of rigorous button pressing, or directional input of any sort, and can provide in-depth, long-term fun unlike the usual disposable mobile experiences.

Games that can pull it off exceptionally well don’t just pull in a few people to play while on the toilet before moving onto the next game. They can form a solid community. Games like Hearthstone. Or Kung Fu Panda: Battles of Destiny. Great titles.

But a new card game is rocking the charts. Can they keep up? 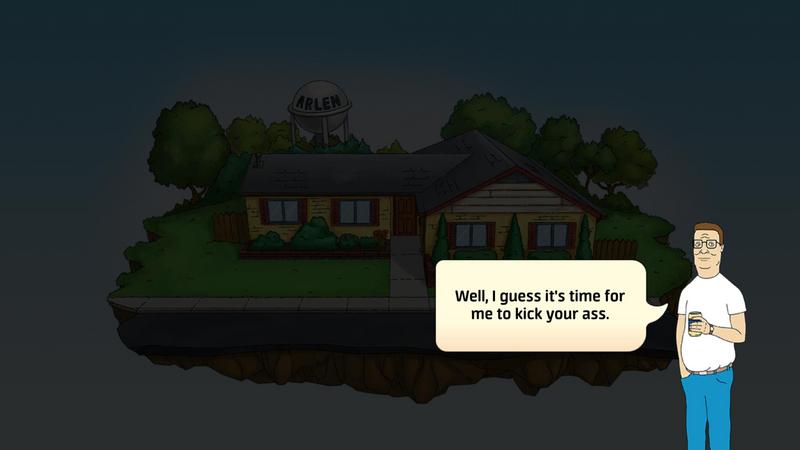 An epic saga, spanning entire universes. And their fate is all in your hands. Animation Throwdown: The Quest For Cards, on both iOS and Android, is the game to end all games. You can play as Hank Hill. That’s really all I need to say.

As the successor of an ancient puzzle, you inherit the destiny of a great pharaoh who must vanquish the evil that has plagued him for centuries and threatens to plunge the world into eternal darkness. Your only weapon? A children’s card game.

A mash-up of different animation properties, Animation Throwdown combines the worlds of King of the Hill, Futurama, Bob’s Burgers, and some other garbage. 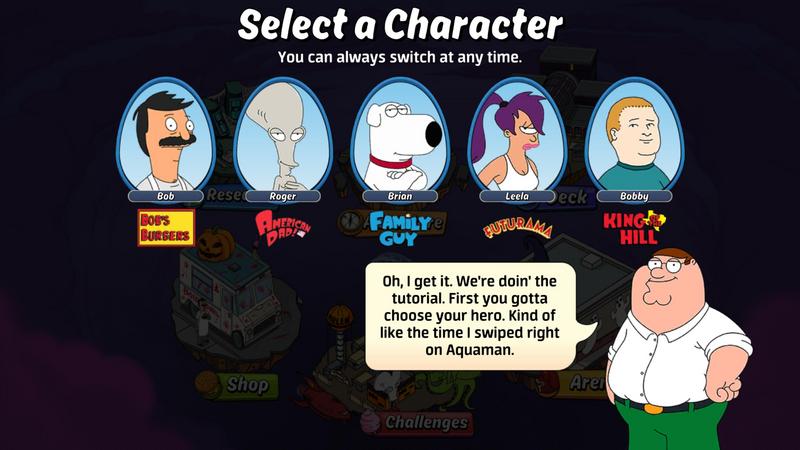 This is a very funny game. Very funny. It almost reminds me of that one time I did that thing. Remember that? Yeah, that was great.

At its core, Animation Throwdown is a game about quick, convenient fun. And microtransactions. Lots of microtransactions. But mostly just matches so fast you could play a bunch with only one trip to the bathroom. Most matches shouldn’t last longer than 2 to 3 minutes. I’ve finished some in seconds. There’s even a convenient little fast-forward button, to make the game go at twice to four times the regular speed.

You’ll start with the themed deck of your choice, though choosing anything but the King of the Hill deck is just foolish. Hank and Bill are probably the most overpowered cards in the game. There’s no stopping the Billdozer. 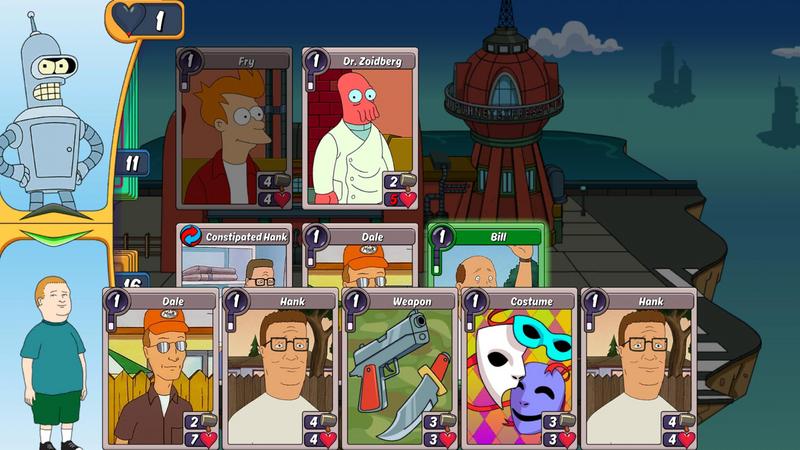 It plays something like Hearthstone, but for retards. You’ll play your cards to defend your hero, but cards all attack automatically. Whatever is directly in front of them gets hit, and if nothing, it’s a direct hit to the player. If your Life Points hit zero, you’re sent to the Shadow Realm.

But you can also fuse your cards on the fly in battle to create stronger cards. That’s where the strategy comes in. The strategy being to fuse the best cards to win.

Fused cards will have greater strength and defense, and special abilities like healing or boosting adjacent cards’ strength. The Billdozer, my strongest card, has the ability to gain 4 attack points with every kill. If I get him into play within the first few turns of a game, he will sweep a player in seconds. He truly is the strongest of the Egyptian God Cards. 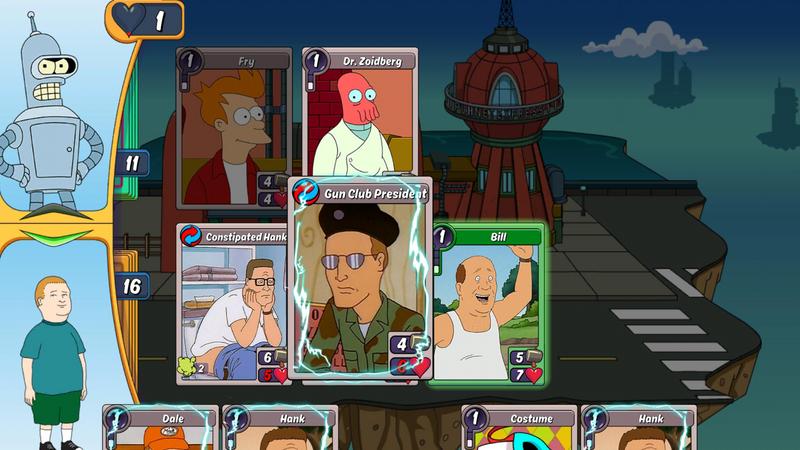 You’ll be able to purchase additional cards to customize your deck with in-game currency you earn from defeating other duelists, but the going is incredibly sluggish unless you bite the bullet and watch ads to increase the payout. Or pay for the premium currency.

Some premium content can be acquired in-game from daily quests and such, but some of it demands real money be paid for it. Not even the premium currency, but actual cash for some stuff.

In other words, there are three separate types of currency in this game. Simply investing in a big thing of premium currency isn’t even enough for this game, because premium currency can’t buy everything. They’re still gonna nickel and dime you after you’ve thrown down whatever money you’re willing to spend. 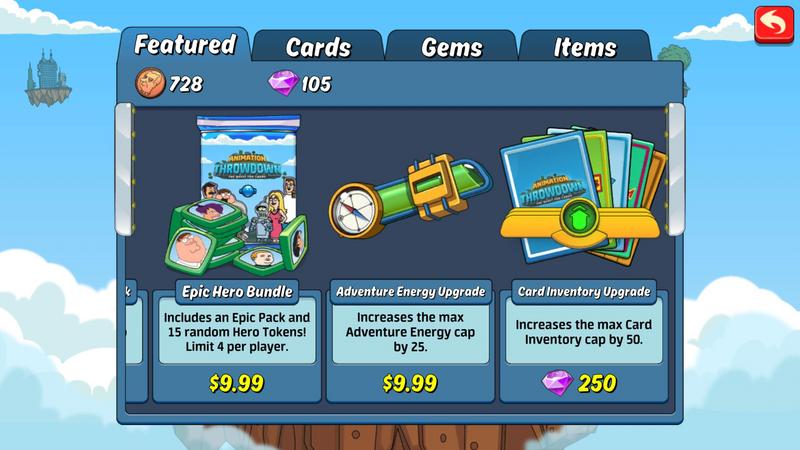 But you know, I’m glad they totally didn’t make this a pay-to-win game, you know? I mean look at that. Limit 4. They’re thinking about the players here.

And each pack that you buy? Each pack comes with one card. Just one card per card pack. Which, to me, seems very not eco-friendly. Think of all the wasted plastic, individually packing each card. That’s ridiculous. But it’s for a good cause. If they stuffed too many cards in those rare packs, everyone would just buy a bunch and that’d make it unfair, right? Limit 4 per person.

You can’t just go throwing money around to win, there are limits. Isn’t that generous of them? That’s how you know this is a real competitive card game. There’s balance. There’s order. 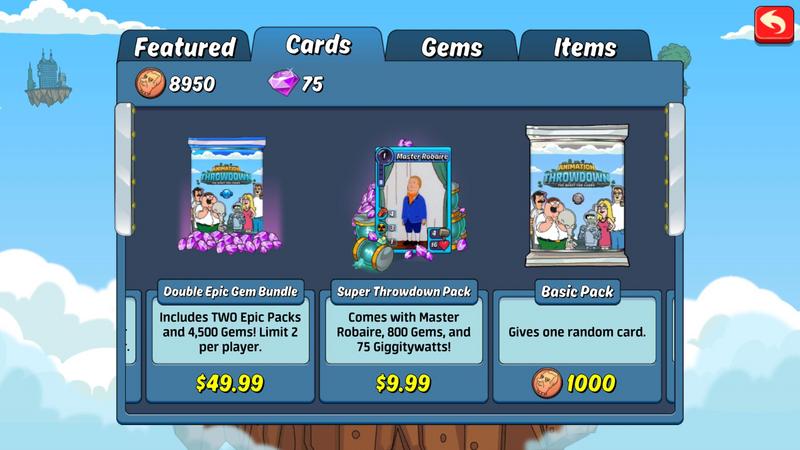 Look, kid, we’re giving you a good price. $50 for two cards and some premium currency. Sorry, limit 2 bud. Can’t have you spending more than $100 on these babies, they’re in high demand. Hot sellers. We’re running out. After you buy two of these hot items, you’ll have to pay the regular price. $100 for one special limited edition holographic Peter Griffin card. It’s the strongest in the game, trust me. Everyone loves Family Guy, right?

If you can put up with the obnoxious ads, ads you’ll need to watch three times in a row to maximize the loot drops, it’s an okay game.

It’s got all your favorite characters, right? Family Guy, your favorite. Everyone loves Family Guy. The greatest show ever. Remember that one time they told the funny joke? Oh wait. I don’t have a clip for that. I don’t think it ever happened.

The “jokes” in the card game really don’t go much deeper than that either. There’s very limited dialogue between characters, and when it’s there it’s never more than just regurgitating quotes from the respective TV shows. Don’t expect anything original and funny here. It’s literally just “Bazinga: The Card Game”. Remember that one character’s famous catchphrase? It’s in here. Wubba lubba dub dub, boom shakalaka, rama lama ding dong, eureka. Look how zany these cartoon characters are. Groovy, dude. Far out. Hitler did nothing wrong. Don’t have a cow, friend. 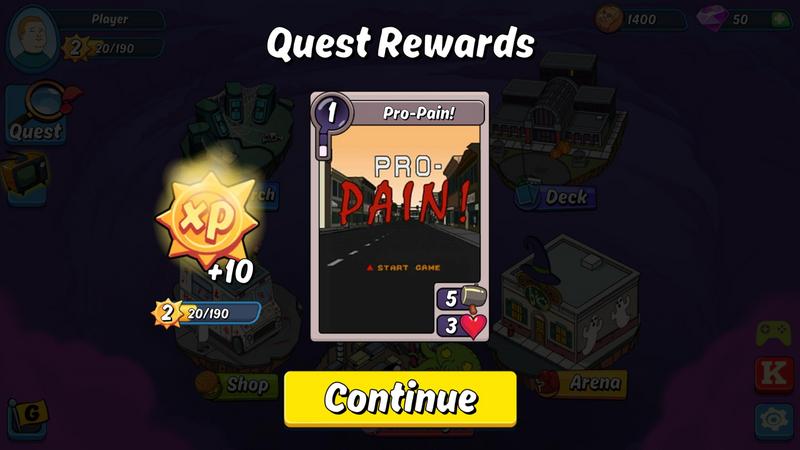 I can’t for the life of me figure out why they stopped at the shows they did. I get that it had to be Fox shows, so Rick and Morty or South Park couldn’t really be roped in. Even though I would’ve played the shit out of a Rick and Morty starter deck. But why no Simpsons?

Is it because The Simpsons isn’t funny anymore, and they were limiting it to funny shows only? That seems like a plausible explanation, except somehow Family Guy and American Dad both made it in and neither of them have ever been funny. Maybe they’re planning to add them as a massive DLC expansion that’ll end up costing you even more money. Who knows.

I don’t see myself keeping this game installed very much longer, and I don’t see myself ever feeling the urge to download it again. I don’t really care what properties they add. Rick and Morty, South Park, Dragon Tales, Jackie Chan Adventures, anything really. No matter how passionately I feel about the shows they add, the game itself just fails to live up to what it could’ve been if they’d toned down the microtransactions and maybe had some writers to add some fresh humor in the spirit of the shows they’re shamelessly flaunting for a quick buck.

And also if they just took out Family Guy and American Dad. Really, if they took those two shows out, I probably would have enjoyed the game a lot more. Seriously, it’s really annoying to need to go into my inventory every time I get a Family Guy card to get rid of it. I don’t want those cards anywhere near my deck, or my inventory. I don’t want them on my phone in general.

If there’s anything to justify white guilt, it’s creating and promoting Family Guy. The creation of Family Guy, laughing at Family Guy jokes, making Family Guy into a thing; only white people do this shit and y’all are the cancer of the Earth. I hope you all feel ashamed for this. 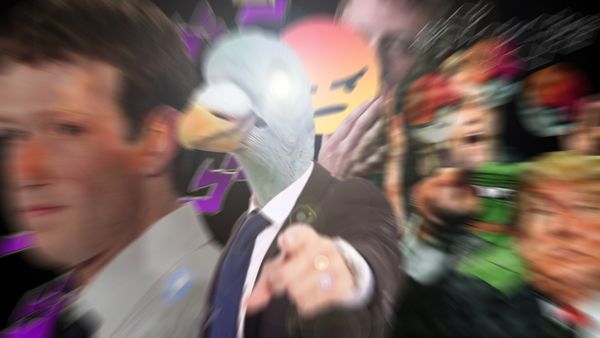 The day has finally come. We’re back. We’re really, for real, back. Apologies for the delay, it was as hard on me as it was on you I’ 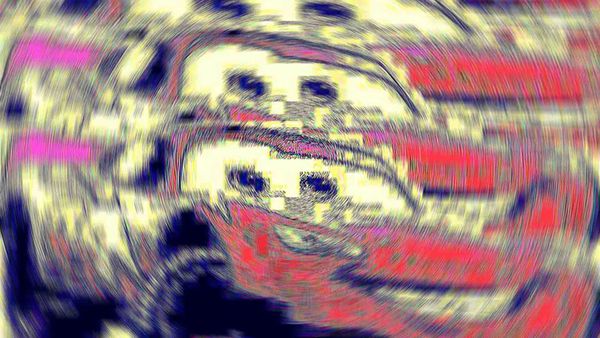 Nintendo has had a rocky launch, but all of their woes are over. Disney has officially announced Cars 3 is coming to the Nintendo Switch. KA-CHOW! I’m so excited,