Video games are capable of conveying a vast array of emotions. Interactive media can weave grand tales that hit just as hard as any traditional form, arguably even more so thanks to the audience being directly involved.

Massive, sweeping worlds with intricate lore. Deep, symbolic narratives that make us think. All kinds of stories take form in the game industry.

And then there’s the odd PBS documentary like Valiant Hearts: The Great War you wake up to in a drunken stupor at 4am and watch with glazed, dead eyes until the darkness takes you once more. 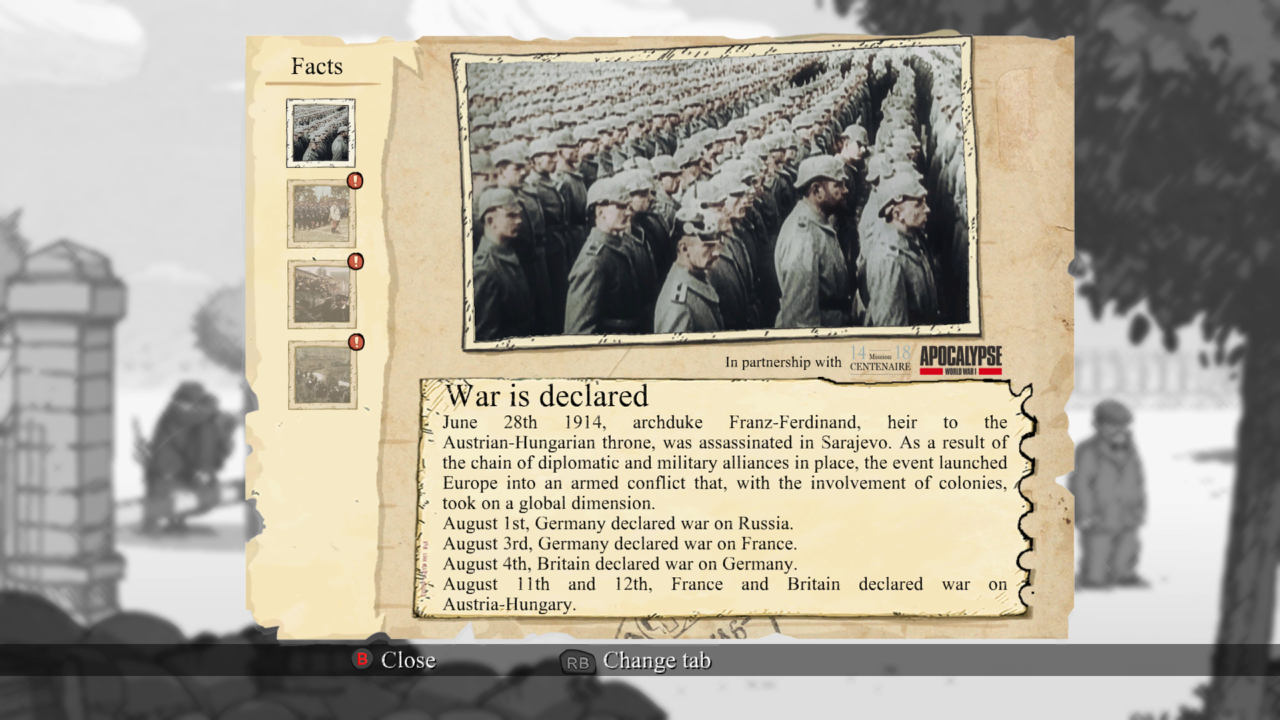 If you never cared for the less popular prequel to World War II, it’s kinda hard to blame you. Like, who even was the main bad guy? What even happened? There were no Nazis or Communists. There were like Serbians or something? And what even is an Ottoman? Maybe if they had cool outfits like the Nazis instead of wearing padded, upholstered, backless and armless furniture on their heads, someone would actually remember what they looked like. The marketing team for WWI was very lacking. It was just kinda people killing each other.

But those people were human. That is the moral behind Valiant Hearts, the historic side-scrolling puzzle game developed and published by Ubisoft for just about every major platform. PS4, Xbone, PC, and even mobile. With or without ads. Wouldn’t want anyone missing out on this deep, heart-wrenching tale.

There’s a dog in it. You hear that? A dog. How can you possibly deny how emotional this story is? 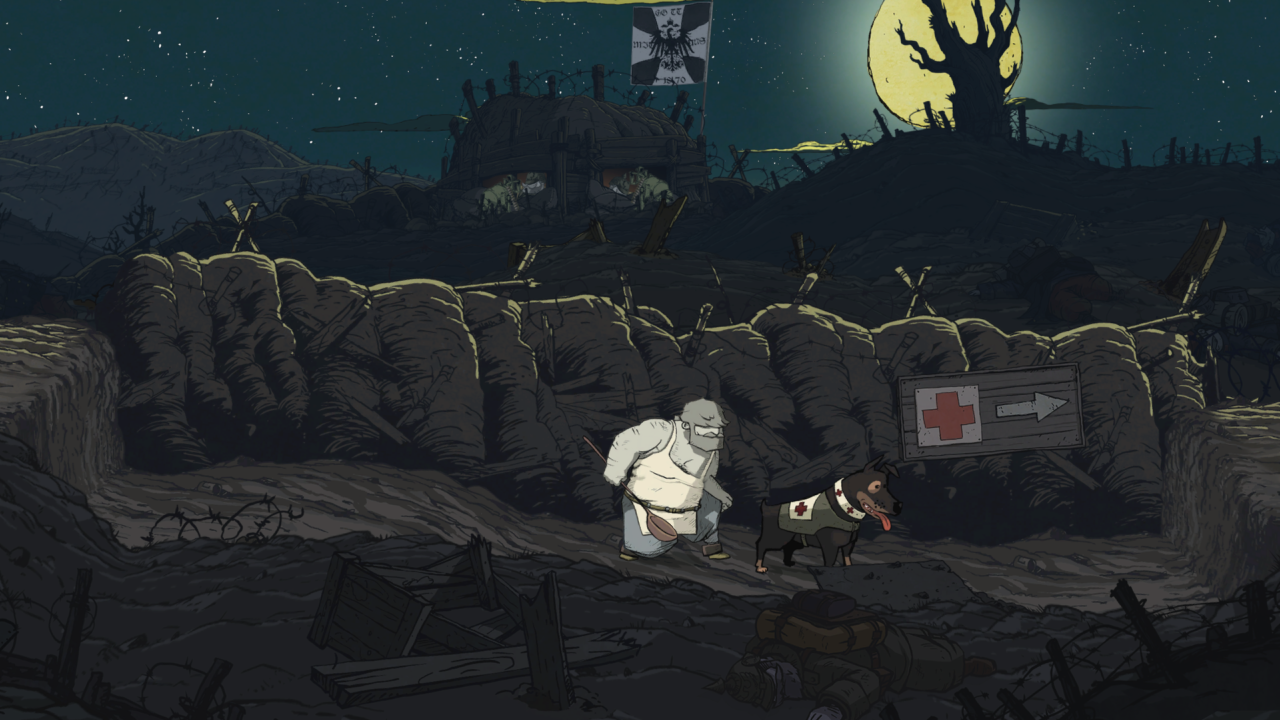 Valiant Hearts is the incredibly moving tale of the bleakness of war, told through the eyes of multiple protagonists, a dog, and some puzzles. Not very hard puzzles, you kinda just walk back and forth and do things. That’s the game.

The totally evil Baron von Robbie Rotten has been using his 100% historically accurate mechanical death zeppelins full of elaborate Rube Goldberg machines to terrorize all of Europe, and is out to steal the Krabby Patty formula. Only our lovable band of Mr. Bean impersonators can defeat him and save the world, all while watching their families and friends die in hilariously animated cutscenes.

If there’s one thing Valiant Hearts totally excels at, it’s being sad and hilarious at the same time. Everyone talks like a Muppet, there’s some cutesy exaggerated mannerisms and speech bubbles, and there’s some hilariously choreographed sequences where you dodge bombs to music. It’s great because those bombs which totally murdered a ton of people are dropping to the tune of a funny song, haha. 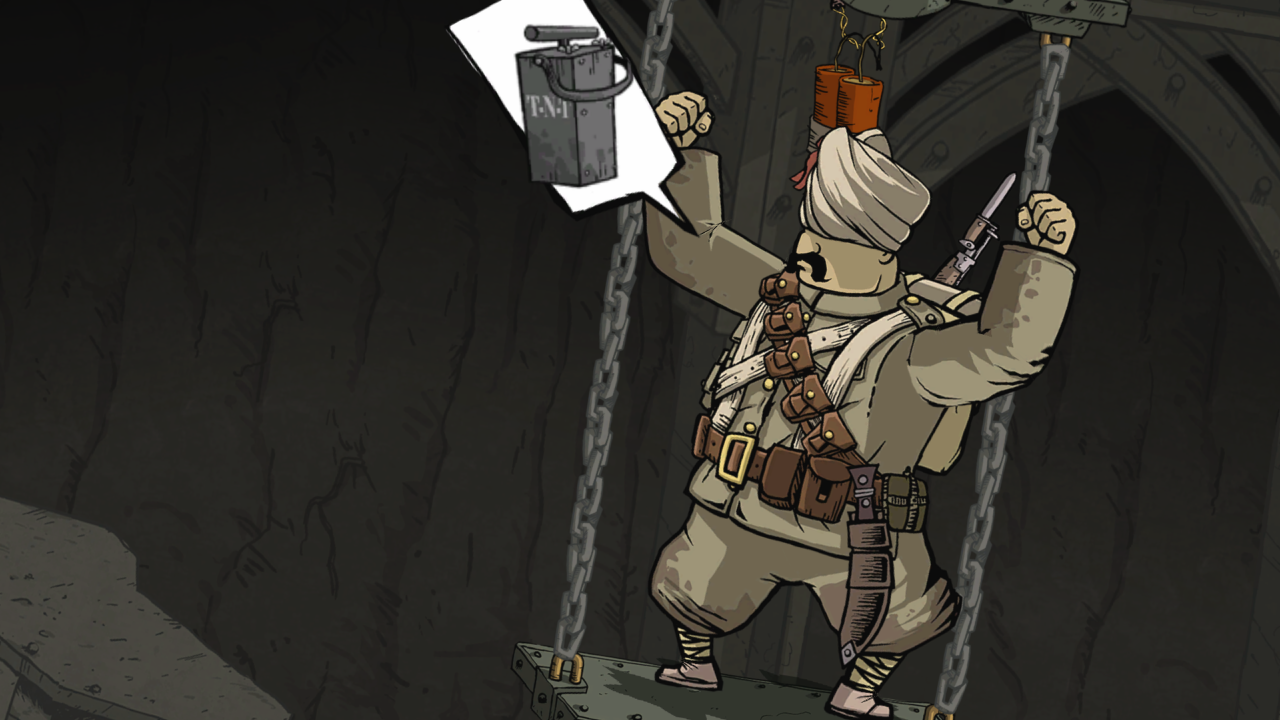 Ha, look at this goofball. Shaking his fists, and saying an object with his speech bubble. Because he can’t talk real words, he’s from Turksmackistack or whatever. They only communicate in incomprehensible shouting and obscene hand gestures. Those crazy foreigners, haha.

It’s a good thing Valiant Hearts totally nailed its ambiance and story right, because that’s the only thing saving it from the painful slog of “puzzles” making up the entire rest of the game. If you wanna learn about World War Uno from this game, hope you like walking to the right and occasionally picking things up and putting them somewhere else.

Given the option of watching an actual documentary and playing Valiant Hearts, it’s a really close shave, lemme tell ya. A droning, dull, monotone voice listing off dates and times, detailing all of the very factual and historically accurate bullshit that happened during WWI versus the trite, mundane, offensively elementary gameplay that encompasses Valiant Hearts. 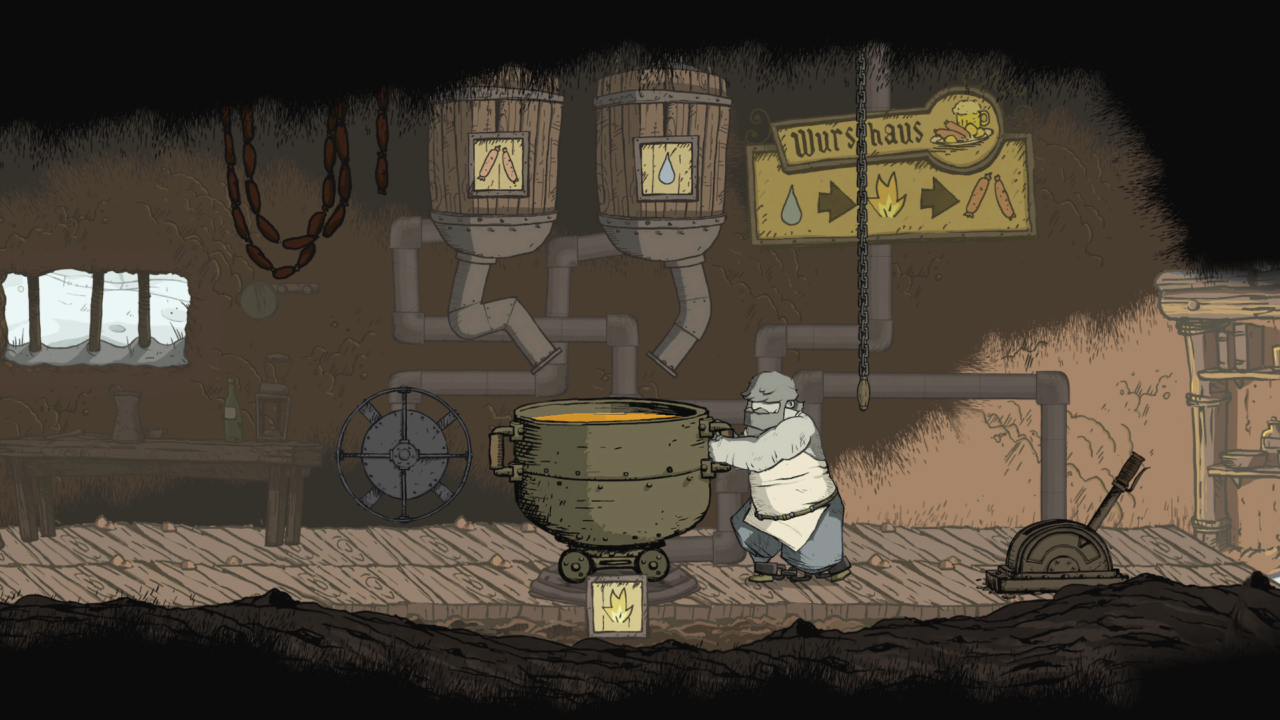 The gameplay is incredibly varied, including puzzles, action, stealth, you name it. And yet all of it is held back by the sluggish pacing and tedious design. It’s not fun. That is the underlying problem. The game is just not fun. Sometimes the puzzle is as simple as needing to flip a switch, but the switch is broken. So you need to go find the switch, which is in a different room. And bring it back and stick it in the socket. You solved puzzle, congrat.

It’s all thanks to the incredibly touching narrative that the game is held together at all. The totally sad, tragic tale of how war kills people dead, which still finds time to throw in some light-hearted moments where some totally wack, goofy shit happens. You could totally combine all the best clips into a Valiant Hearts Funny Moments compilation. That shit would be lit. 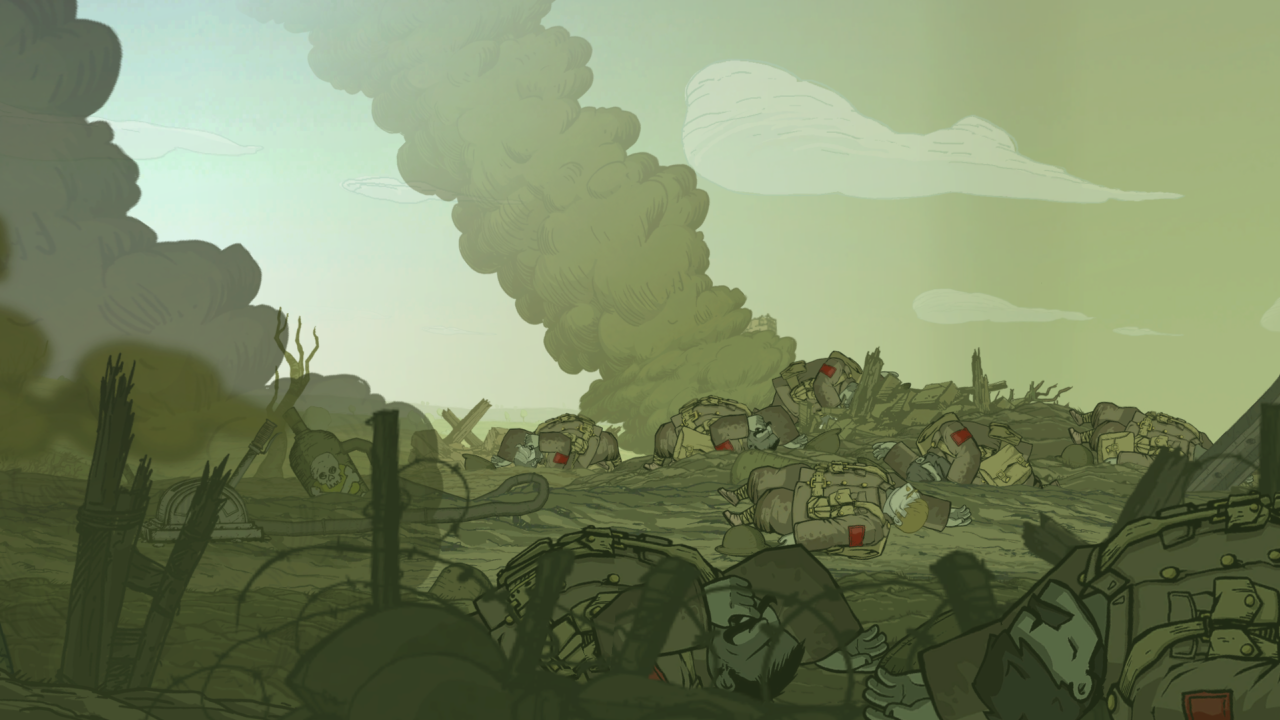 Valiant Hearts is a beautiful game, oozing aesthetic and ambiance. It tells a tender, emotional story with the tact and respect of a Garfield comic strip over the course of several chapters of matching shapes and colors; the shapes and colors are all in another room though, and you can only move from room to room on one of those little stair lift things disabled people use to get around their house.

The game is clearly made with a lot of love, the art style is great and there’s an incredible attention to detail. They’ve really gone to the library and done their research on this guy, and it’s really pretty educational. They should start packing this bitch onto CD’s and shipping it with history textbooks or something. Because it’s educational and really fucking gay, just like the games they usually let you play at school. Except Lemonade Stand, that shit was the best. Learning math was fun.

Valiant Hearts doesn’t seem to know what it’s doing in the purest of ways, and yet it’s good at whatever it’s doing. Not what it’s trying to be, but what it’s doing. It looks good, it’s incredibly polished, and the attention to detail is there. But it’s an entry-level puzzle game that’s too slow and clunky to be a visual novel but really would’ve been better off as one, its lazy excuse for interactivity actually holding back the game instead of helping it. 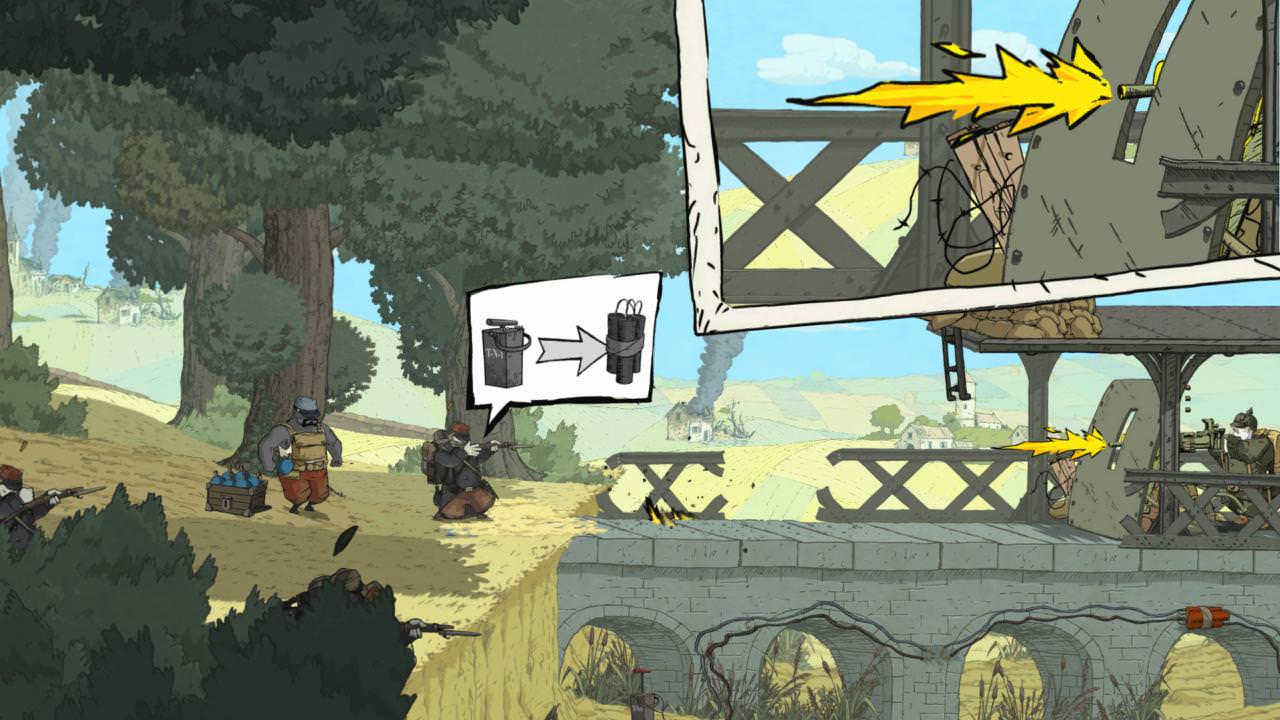 It’s a tragic war story written as a Peanuts cartoon where Snoopy skateboards around with sunglasses on and fucks Charlie Brown’s mom and makes him watch because he’s just so fucking zany. That dog will burn in Hell, God damn him.

I wouldn’t call it a bad game, that would be a little too harsh on it. But to call it a good game would be a little more than an overstatement. It’s simply what it is; a documentary as a video game, a blunt, monotone stream that drags on at a slow, constant pace. Some people tune in specifically to watch it. They’re gonna be the ones that enjoy it.

And anyone else lucky enough to catch it at 5am after throwing up pizza rolls and sitting huddled in their bed, wrapped in a thick cocoon of blankets while the spinning stops, they’ll be watching. They’ll be comforted by the voices, the pictures, maybe even retain a tidbit of knowledge. But it’s not something they’d tune in to watch. And it’s not gonna be what they were watching when they were engorging themselves on several boxes of pizza rolls.

Puzzle games are pretty fun. They’re a bit of a niche thing though, nowadays. Usually something you gotta download, or play on your phone, they rarely make physical copies 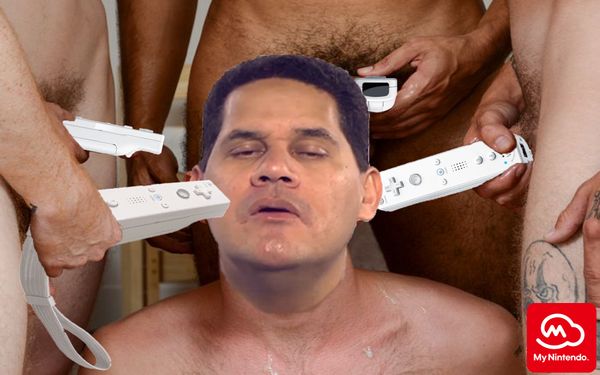 Nintendo’s loyalty reward program has been in an awkward limbo for quite some time. After killing off Club Nintendo back in 2015, Nintendo launched the new “My Nintendo” program,