Rick and Morty is one of my favorite shows. Fantastic show.

Pokemon is one of my favorite games. I can’t think of any other game with as many different things to beat off to as Pokemon has.

Combining them should be perfect for me, right? That should be something I’m really into, right? 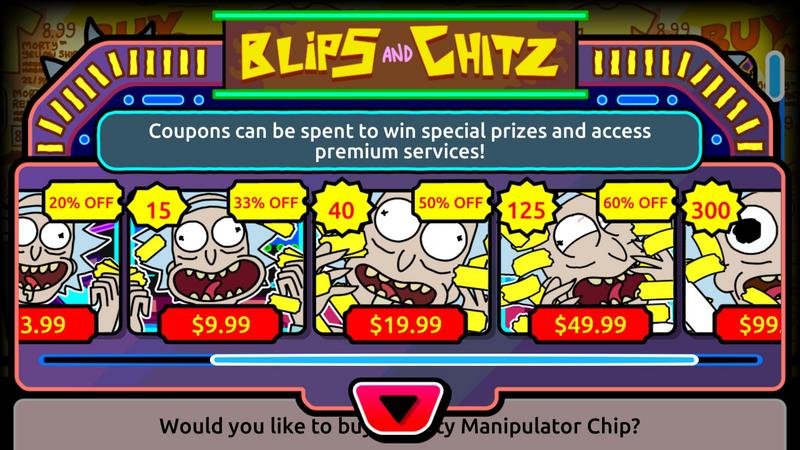 I’m honestly a little hurt by this, but I don’t know why I had my hopes up for a shitty mobile game.

Pocket Mortys takes all the fun of capturing and training Pokemon, disregards most of it, and just slaps together one of the most barebones RPG experiences I’ve ever played. With some zany, wacky Rick and Morty charm and microtransactions to act as the duct tape binding this cheap mess together.

Come on, guys, it’s your favorite dudes. Rick and Morty. Give us your money to catch some Pokemans. Wibble dibble ding dong. Your zany pals Rick and Morty. Look at us and our comical blatant disregard for everything lol haha razzle dazzle flim flam we’re all gonna die anyway nothing matters lol science.

The first few moments of Pocket Mortys is promising. You get a taste of the battle mechanics and capturing another Morty. It all seems exactly like Pokemon. And it is. It’s a literal cut and paste of Pokemon mechanics. It’s dumbed down considerably, but it’s there. 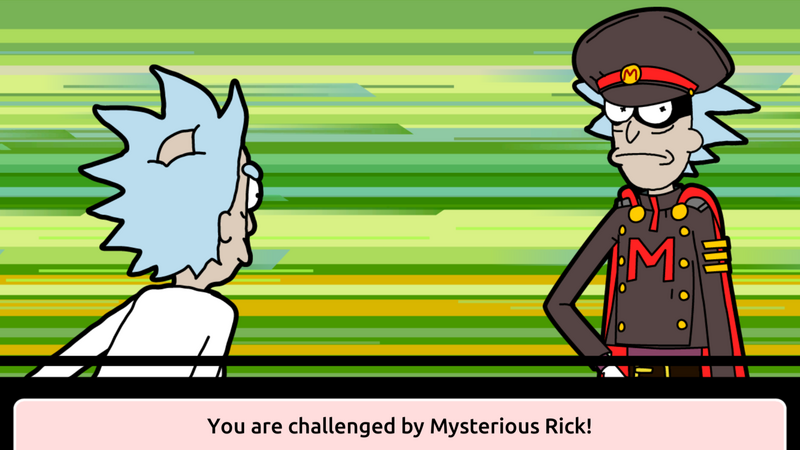 There’s type match-ups, just like Pokemon. Moves of the correct type will do extra damage, moves of the weaker type will do less. It’s a simple Rock, Paper, Scissors thing, like the types are literally Rock, Paper, and Scissors. There’s only three types, plus your default Morty’s neutral typing. But it works.

It is slightly more difficult, however, in the sense that it’s not quite as simple. Which you’d think it’d be the other way around, less types seems easier. But knowing a blue turtle is Water-type or a red dragon is Fire-type is a lot easier to figure out than what type Banana Morty, Cat Morty, or Spoon Morty are. 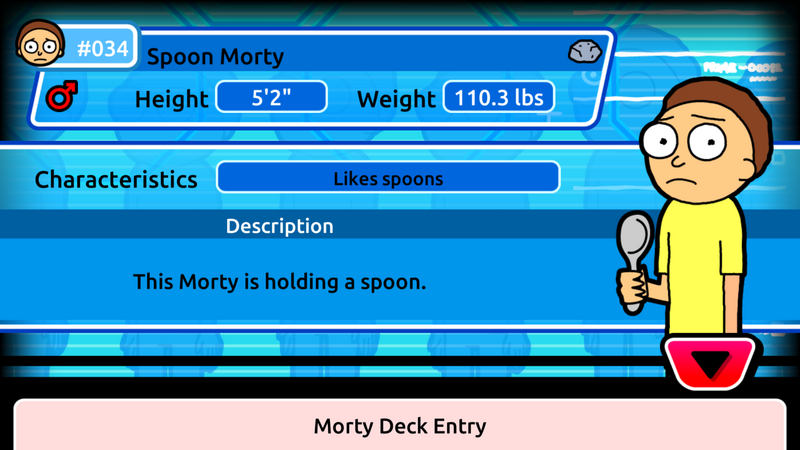 Mortys can evolve, though it takes a little more than just leveling up. You need to fuse together Mortys of the same species to evolve them, so it’ll involve capturing a lot more. Other than that though, it’s essentially a very primitive Pokemon title.

And then, everything goes to shit. Somewhere between the start of the game and capturing a full team of Mortys, the difficulty spikes to an absurd degree, making simply playing the game an obnoxious chore. Progress screeches to an absolute halt as you find yourself caught in a never-ending grind. 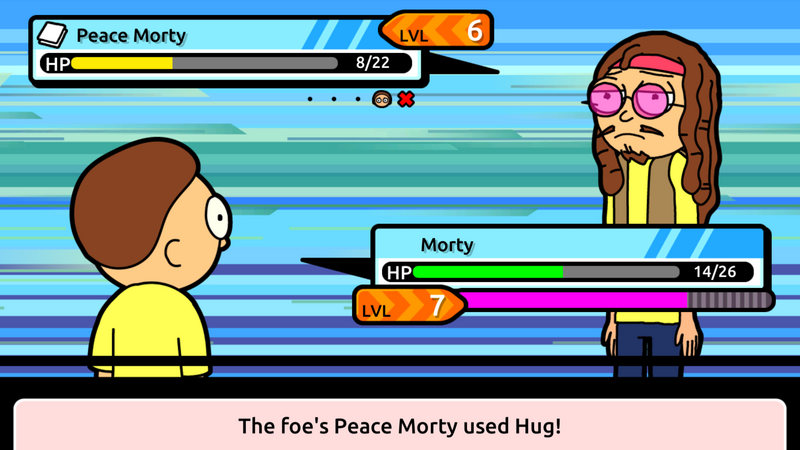 When you get to the point where you have a full team, every single trainer will have a full team. A full team that can more than rival yours, at times. And the way the battles go, you really can’t defeat someone’s Morty without losing one of your own Mortys.

They’re not as quick as most Pokemon battles, where a string of perfect type match-ups can end a battle in seconds. There’s always a back and forth of attacking each other, and it takes longer than it should. Even with type match-ups. Which, again, are harder to plan for since memorizing what Morty is which type is so difficult. What type is Banana Morty? He’s a banana. How the fuck are you supposed to figure that out at first glance?

Some of them are pretty easy to figure out, a Morty with claws is gonna be Scissors-type. “Spooky Morty”, with a sheet over his head, is Paper-type. Okay, yeah, I can kinda see that. But other times it seems perfectly random. “Geriatric Morty”, an elderly Morty, is Paper type. Why? I’m not sure. “Veiny Morty” is Scissors-type. He’s a Morty with no skin. Is he Scissors-type because all of his skin was cut off? I don’t know. 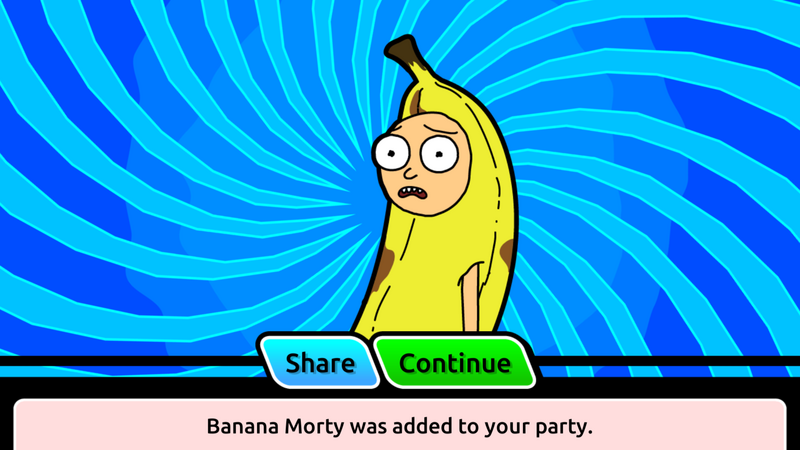 “Tired Morty”, a Morty that just wants to sleep, is Rock-type. Wouldn’t he be Paper, because of the already established sheet = Paper rule? Nothing makes sense.

Memorizing Morty types is the least of your worry though, because every other section of the game is designed to make you hate the game. The randomized dungeons filled with other Morty trainers with maxed out parties that are a chore to fight through have no exit or anything to them, so should you need to heal up before a boss fight, your choices are to stock up on an absurd amount of healing items beforehand to heal your entire party after every single fight, or just let your team die.

I was finding myself avoiding as many battle as I could towards the end, just trying to find the boss so I could hurry up and get to the next part of the game. A game that struggles to reward you with anything more than “haha lol look how zany we are, sizzle dizzle snoop dogg look at how random we are, spoon morty haha because he has a spoon and he evolves into spork morty haha XD so random”. The dialogue isn’t even particularly funny, considering how great the writing is to actual Rick and Morty episodes. 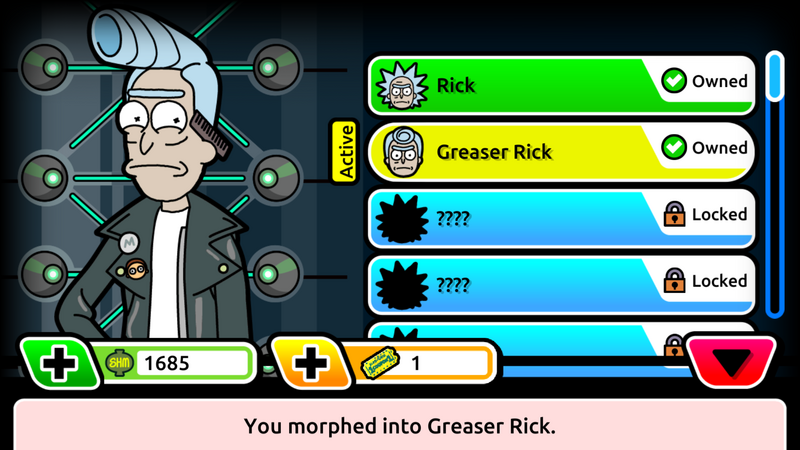 Considering that Pocket Mortys is free, it’s not too bad. A crippled Pokemon clone, for free, is really not too bad. All the fun of Pokemon is in there. There’s even an interesting little crafting system where you can merge items to create better items. Pokemon doesn’t have that. This is like totally just as good as Pokemon.

Even if almost all of the move animations are literally the same, and all of the monsters are the same but one is holding a spoon so it’s funny, and it’s all randomly generated and grindy and not fun at all. It’s really not that bad, you know, for free.

Eating the stray pieces of shredded cheese and lettuce out of Taco Bell bags you find in the dumpster is free, and that’s both your daily necessary calcium and leafy green vegetable serving for the day. It’s literally just as good as buying actual food.

If you’re looking for a decent Pokemon experience but don’t want to pay for it, you can totally go for Pocket Mortys. Or you could just pirate actual Pokemon games like the horrible person you are. Fucking pirate-ass bitch. You aren’t even a real pirate, unless you go all the way and rob GameStop of all their Pokemon games while wearing an eye-patch. That’s respectable pirating. Not that shitty emulator stuff. 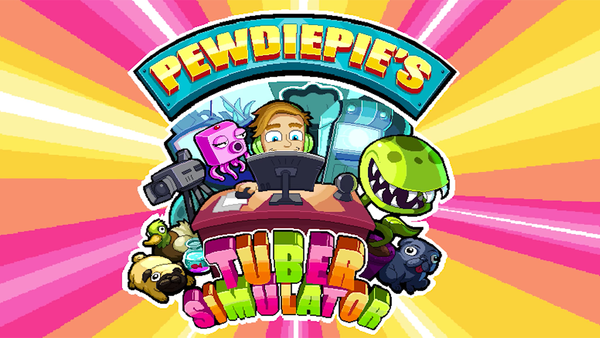 Haha, how’s it going bros, my name is Waaaaaffle King. Today, we’ll be looking at the next biggest app to hit the mobile market since Miitomo. Remember that 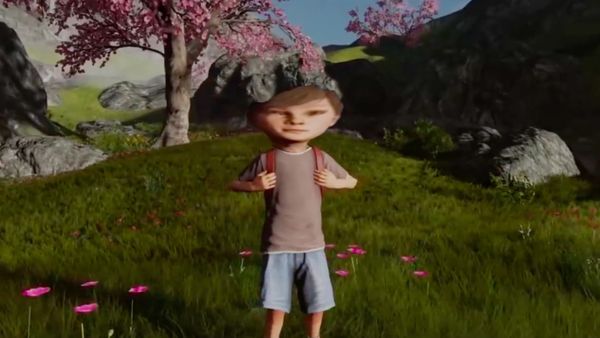 With the Nintendo Switch on the horizon, we’re gonna need some games. That’s the most important part of any new console launch, games. Nintendo fans might think otherwise,