Yes, Jimmy Kimmel did blackface long ago. Was definitely in poor taste, and not very funny. But he's also himself just critically unfunny. Who's cock at Disney do you think he sucked to get that job? You think it was Goofy? It was definitely Goofy, I bet Goofy is fucking packing but he just can't get laid on account of his severe mental disability.

Jimmy Kimmel statues, posters, billboards, just about anything with his stupid, smug face on it is coming down. Not because he's a bigot, a racist, or a hypocrite like every other bourgeois Hollywood scumbag. No, it's just because everyone got tired of listening to his annoying, condescending, self-important, brainless talk show host drivel.

One BLM protestor was shocked when we told him. "What? He did blackface? Man, that's just not cool. He really is the most unfunny, talentless schmuck of a talk show host. I don't know how he got that job. He must've sucked off someone at Disney. Probably Goofy. You just know Goofy is packing. I hope he choked on it though. God, I'd much rather hear Kimmel choking on Goofy's cock than one more of his tone-deaf Orange Man Bad jokes." He said, while hanging a bronze statue of unfunny corporate shill Jimmy Kimmel from a noose and dousing it in pig's blood.

"He asked women to do what? That doesn't sound funny at all, and really raises some questions about his character. Doesn't he spout hypocritical liberal celebrity platitudes all the time on his show? Man, that really adds a whole new dimension to how severely not funny he is. He's not funny, and he's also a hypocrite. I'm just here tearing this poster down because I hate him though. I had no idea he was also a bigot, I just really want to see him eat shit." Another BLM protestor remarked, deep in thought while taking a fat shit on a poster of Jimmy Kimmel's face they'd torn down and thrown to the ground.

It doesn't even matter that Kimmel is a hypocrite, a shill, a racist, or a misogynist though. He's just not funny. Watching old people get hit in the nuts on America's Funniest Videos is higher brow comedy than Kimmel's self-indulgent circlejerk of a talk show. His humor is on par with Nancy Pelosi epically clapping back at the bad orange man by calling him fat, just now with more production value.

I think I speak for everyone when I say I want to see Kimmel eat shit. Please, Jimmy Kimmel. Eat shit.

The fight against COVID-19 is finally over, as leading expert Doctor Mario Mario has discovered the exact formula for the vaccine. A pill that is one half red, one half 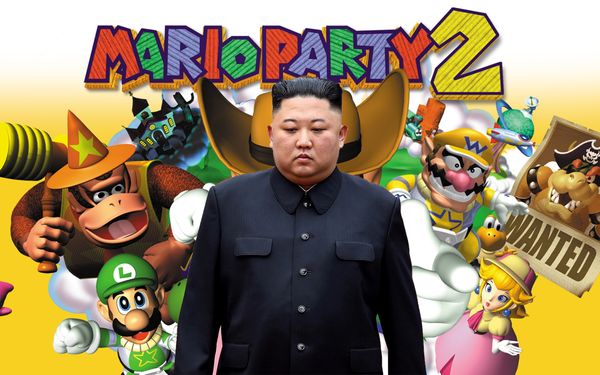 Tensions with North Korea are escalating once again. Kim Jong-un has issued an unwavering demand. Mario Party 2 on PS5, or else. Trump officials met with Kim Jong-un to negotiate,