The 2017 Game Awards were huge for Nintendo. They took home awards for both The Legend of Zelda: Breath of the Wild and Super Mario Odyssey, and a number of other achievements. But that wasn’t the end of it. They had a lot more to announce too.

Bayonetta will be making another triumphant return exclusively to a Nintendo platform, despite the lukewarm success of Bayonetta 2 on the Wii U. Nintendo still thinks there is a future for the franchise, and will be bringing both 1 and 2 to the Switch, as well as a new installment. Bayonetta 3 will launch next year, supposedly, and take Bayonetta in a direction never before seen. The stakes will be raised higher than anything you’ve ever experienced.

Kamiya, director of the Bayonetta games, had this to say on the new title:

“In Bayonetta 3, we want to explore a new side of Bayonetta. A side we’ve never seen. As you know, in the past games, whenever we see a younger version of Bayonetta, she does not have the mole. But modern Bayonetta, she has the mole. My personal explanation for this, is that witches only get moles after they’ve experienced something important in their life. This is why, in Bayonetta 3, we will be exploring the origins of Bayonetta’s mole, and the impact it has had on her. I remember when I was working on the first Bayonetta title. I found a lump, right here. Would you like to see it? Don’t worry, it’s benign. Here– you can touch it, it’s okay. Anyway, I found this lump. It was a cause of great concern. I would like to put some of that experience into a game.”

Unlike her past games, where Bayonetta went face to face with angels and demons, in 3 she will be going up against something much scarier. Dermatologists, and waiting rooms. 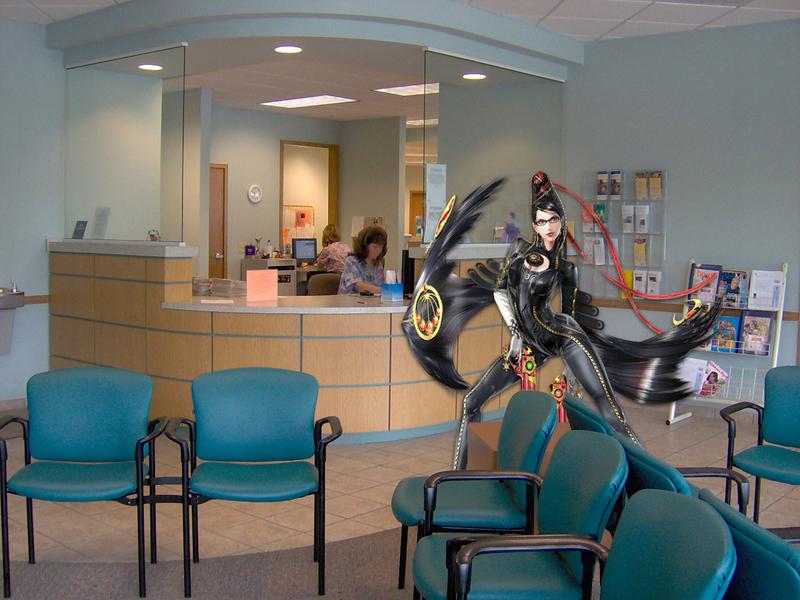 Bayonetta will have to deal with new arch-nemesis Beth, the receptionist. Beth will always tell her “the doctor will be with you shortly, it’ll just be a little longer”, but it’ll never just be a little longer. It’ll always be a lot longer. And they don’t have a plugging outlet, and your phone will be at 20%. It’ll take all of Bayonetta’s witching skills to overcome that wicked bitch and her wiles.

Having discovered a mole where there was no mole before, Bayonetta will get it checked out at her local dermatologist, where they tell her it may be malignant. They’ll need to run some tests to make sure it’s benign, and it’ll take about a week or two for the results to get back. In the meantime, Bayonetta will need to keep coming in for regular appointments to make sure there are no immediate developments, and keep a watchful eye to make sure there are no drastic changes in size, shape, color, or any unhealthy discharge.

This new medical mystery won’t come without hardship, and Bayonetta will be forwarded to many a specialist to make sure she gets the care she needs. She’ll need to make sure they’re covered under her insurance also. 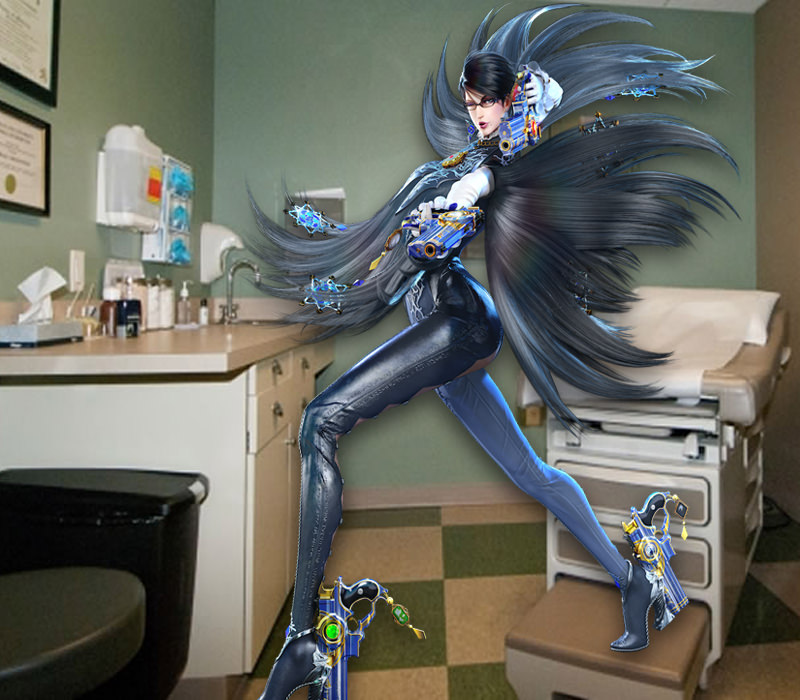 Long-time fans of the series need not fret, all the fast-paced action and sexy fanservice will be right where you expect it. You’ll need to furiously button-mash to scroll through Bayonetta’s Twitter feed as she sits in the waiting room, and you’ll need to have lightning-quick reflexes to stand at the right moment when your name is called. Should you mess up and stand when someone else’s name is called, everyone in the waiting room will turn and stare at you, dealing a crippling blow to Bayonetta’s ego and self-worth.

And when the doctor asks if Bayonetta has noticed any other growths or blemishes, she will bare it all to make sure she gets the proper treatment she needs, in typical Bayonetta style.

The stress of all the procedures won’t be easy for her, though. She’s no longer in her prime, no longer the woman she used to be. Can she still be a witch? Should she give it up? Bayonetta will also go through a maddening mid-life crisis, and at one point in the game start going for jogs and exclusively wearing MC Hammer pants. This will be the toughest ordeal you’ve ever seen her through. 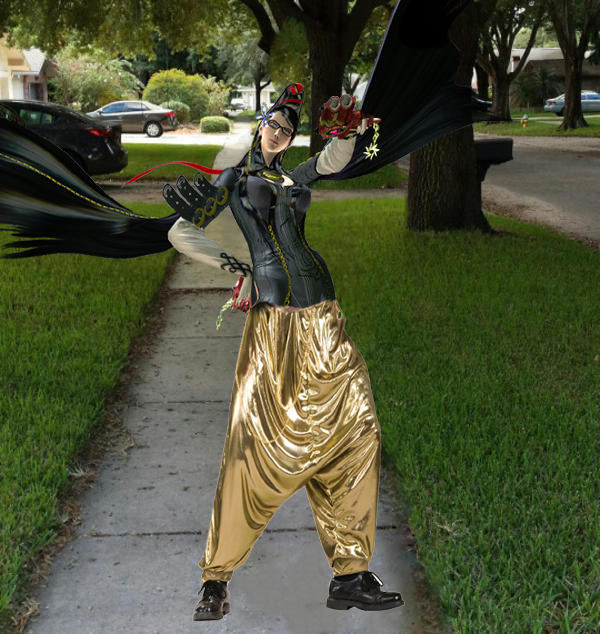 Will Bayonetta’s mole be benign, or malignant? Will she need to have her mole removed? Will that twisted bitch Beth ever get what’s coming to her? It’ll be a wild rollercoaster of nonstop action and thrills in Bayonetta 3.

When we tried to squeeze some more juicy tidbits out of Kamiya, he gently placed a finger on my lips to shush me, before turning into a cheetah and leaping out a window. I was concerned that he would fall to his death, but he promptly became a condor and flew into the sunset. There is no telling where he is now, or what cruel fate awaits the Umbra witch.

Bayonetta 1 and 2 will be released for the Switch in the Spring. There is no concrete date for 3 yet, but we can only expect it to release sometime in 2018. The suspense is killing me. 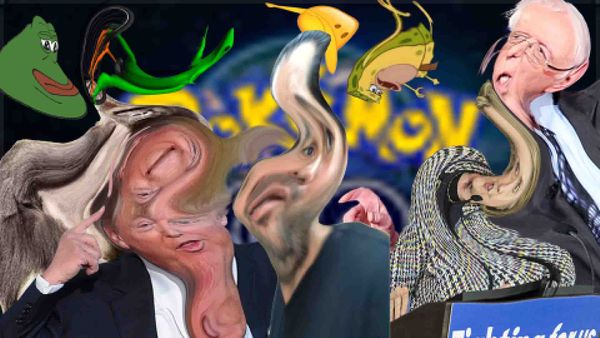 Guys, I got some bad news. We’re all probably gonna die. Or something. This is serious. 2016 was a rocky time for our world, but it also saw 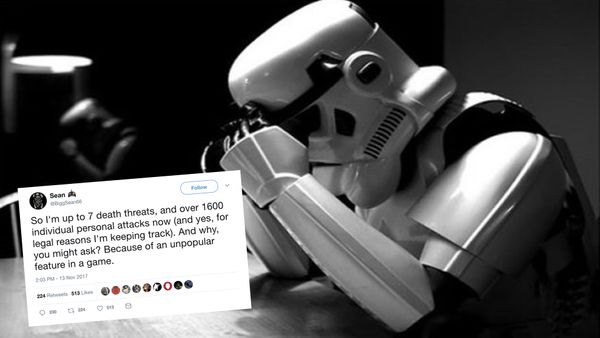 EA’s Star Wars Battlefront 2 saga has been ongoing since the game’s initial announcement. First people were excited that they were finally gonna improve upon the